How to Make Soft Rotis with Sourdough Discard

Here’s a great recipe to use up that sourdough discard you hate throwing away: soft rotis that go perfectly with most Indian curries. It couldn’t be easier, and I’ve included step-by-step photos to help you along.

Yeast shortages last year led many home cooks to get on the sourdough wagon, which was wonderful, because sourdough is really one of the most amazing things you can put into your mouths and your bellies. It not only creates baked goods that are incredibly tasty, but the starches in these foods are pre-digested by probiotic bacteria, making them better for you.

I’ve been guilty of using this blog as a soapbox to preach the amazing qualities of sourdough for many years now, and it thrills me when you write in with your own adventures of baking with sourdough.

Like many of you, I am always looking for things to do with the discard from my sourdough starter, George (who was named by a reader), because I hate throwing it away. I can’t collect enough recipes to use it in.

I’ve blogged many recipes using sourdough discard before, but one of my favorite ways to use it is in roti or chapati, a flatbread eaten nearly every day in many Indian homes.

I began recommending the use of sourdough discard in rotis and naans and parathas to my Indian readers asking for ideas on what to do with sourdough discard. The more I used it in Indian flatbreads, the more impressed I was. Now I rarely make rotis without sourdough, they’re that good.

Why you should add sourdough discard to rotis

A roti is usually unleavened, and it is delicious that way. That also makes it particularly suitable for sourdough discard because you are not looking for the discard to help give your dough a rise, as you would need it to if you were making any other bread.

The discard, however, adds amazing flavor and also helps make the rotis softer, which is perfect.

You don’t have to wait longer than a half hour to make the rotis after you’ve kneaded the dough, but you can definitely refrigerate the dough overnight or even leave it in the refrigerator a couple of days before you make the rotis. This will have the added benefit of giving the beneficial bacteria time to digest the starches in the dough. Do keep in mind this will also develop the sourdough flavor further, so if you don’t want a strong sourdough flavor in the rotis you should make them rightaway.

(Pooris are great with sourdough discard too. If you let the dough, with discard added, stand for a few hours, or even overnight, you will get the crispiest pooris ever. Jay guzzles them down all by themselves.)

How much discard should you add to the roti dough

This, once again, depends on how much you love the flavor of sourdough.

You can add as little as a quarter of a cup of sourdough discard if you want barely any flavor at all, or as much as a cup. I usually use half a cup for two cups of flour.

For hardly any sourdough flavor make the rotis no more than 30 minutes after kneading your dough. For a more developed flavor let the dough stand longer, even overnight, in the refrigerator.

What to serve with the sourdough rotis 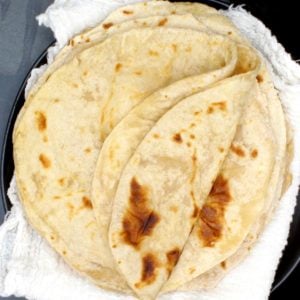 How to make soft rotis with sourdough discard

Here’s a great recipe to use up that sourdough discard you hate throwing away: soft rotis that go perfectly with most Indian curries. It couldn’t be easier, and I’ve included step-by-step photos to help you along.

How to Make Vegan Lemon Curd