Back on Track | Fast Running

Contents hide
1 Set to a certain rhythm
2 Pre-race nerves
3 The races unfold
4 A time to race those around us
5 3 races 3 different build-ups
6 A mental adjustment
7 I had definitely felt the last k, which was a 2:51, but I found myself still able to keep running fast.

Nigel Martin’s latest Fast10 blog talks about the transition back from marathon to track, so maybe has some tips for Sir. Mo Farah in there.

Almost exactly 2 months on from my marathon debut, I was back on the track for a 5000 at the Sportcity BMC.

Since completing the marathon, I made a decision not to chase fitness, despite goals over the 10,000 within 3 months – my 10k PB was in dire need of improving. This meant just getting the miles in at a very easy pace and two sessions a week; generally, a tempo session and a track session. By the 5000 I only had 6 weeks of sessions under my belt, building from 50 to 90 miles per week

In the immediate aftermath of the marathon, I struggled to work out why the race didn’t really go as planned as I’d hit everything I wanted to in training.

It wasn’t until after the 5000 that I think it really became clear; it was my tempo pace.

Set to a certain rhythm

Since as far back as early November 2020, I’d had marathon pace clearly in mind – 3:12/k. I was certainly capable of doing it in tempos, but really, I was forcing it. By focusing on it so early, I didn’t let things progress naturally.

In contrast, since the marathon I’ve run all the sessions more controlled. In particular, I did a block of 80/85/90mpw with 40/45/50min tempos. These were run purely to HR with no pace feedback, starting off at 80-85%HRR and no higher up to half-way, then up to about 90% on the way back.

For me tempo is meant to be a feeling rather than a pace, but running to HR worked really well as I was basically holding back for the first half.

The paces were relatively slow; I was tempoing quicker 4-5 years ago when my 5k PB was a minute slower! Roughly HM pace + 30s (10-15s/mile slower than MP), but I responded really well. I noticed my other session each week was going very well.

In the week before the 5000, the nerves were in full flow. I certainly had sub 14 in mind, but I knew it would be a tough ask.

Coming back from the Marathon was a total unknown. The race was being paced at 66s, which is a bit of a mental block for me. It’s only a second a lap too fast, but when you’re on the limit that’s enough to make or break the race.

Often people don’t go with 66s and it ends up being 67s anyway, or the pacer doesn’t quite hit the required pace, but this was being paced by Tom Marshall and I knew he would nail it. Of course, everyone in the field was going for sub-14, so it was busy early on.

I went through 2k in 5:30 and just before 6.5 laps I took the lead of the 2nd group as we were 10m behind the pacer, but I was keeping it controlled to save something for the finish.

Three laps later I asked for help and you could say I got it, as Eoin Everard behind shifted gears completely and would complete 65s/lap for the remainder. I half-locked on and at least committed to the move, which took me away from the group, but within 100m I was on my own until the end. I got my 2nd fastest track time of 14:05 though, which I was really happy with all things considered.

The following week, another race, this time the 10,000. Taking over from Highgate for one year, the event at Birmingham incorporated the British Championships, Olympic Trials and Euro Cup races. I took part in the Euro Cup B Race.

I was pleased to see a really good list of similar standard British runners. The pace was 28:30 or 29:00 with the wave light. Although sub-29 was the dream, it had been a hot day and I noticed it was very humid doing the warm-up.

Having watched the C Race, I was surprised how good everyone looked at 6k, on pace for 29:10, then suddenly the lights were streaking ahead and there were some big blow-ups. Having raced Highgate two years ago at 5:30pm in very hot weather, I split 14:45/15:02 and despite the big positive split I went from 13th at half-way to 7th! This was about racing the others, not times.

A time to race those around us

The 29:00 lights were a bit ahead of the whole group by now. We stuck to 70s for another couple of laps before the pace slipped. I was feeling pretty comfortable at this point and coming up to 8 laps to go, I found myself making a break for it. From here to the finish, I knocked out 71s laps and a decent last lap, picking off quite a few in the process. At half-way I was 24th of 35 and I finished 13th despite another positive split of 14:34/14:48. I was 2nd Brit to Ellis Cross, who was too strong in the 2nd half. Another great result for me and a 25s PB, finishing in 29:22.

And so finally onto the Midsummer Leeds 10,000, taking place 3 weeks later. I knew it would be a great opportunity to run really fast, possibly my best chance of the summer. The race wasn’t until 9:20pm, which meant cool weather and again the race was a very high standard. 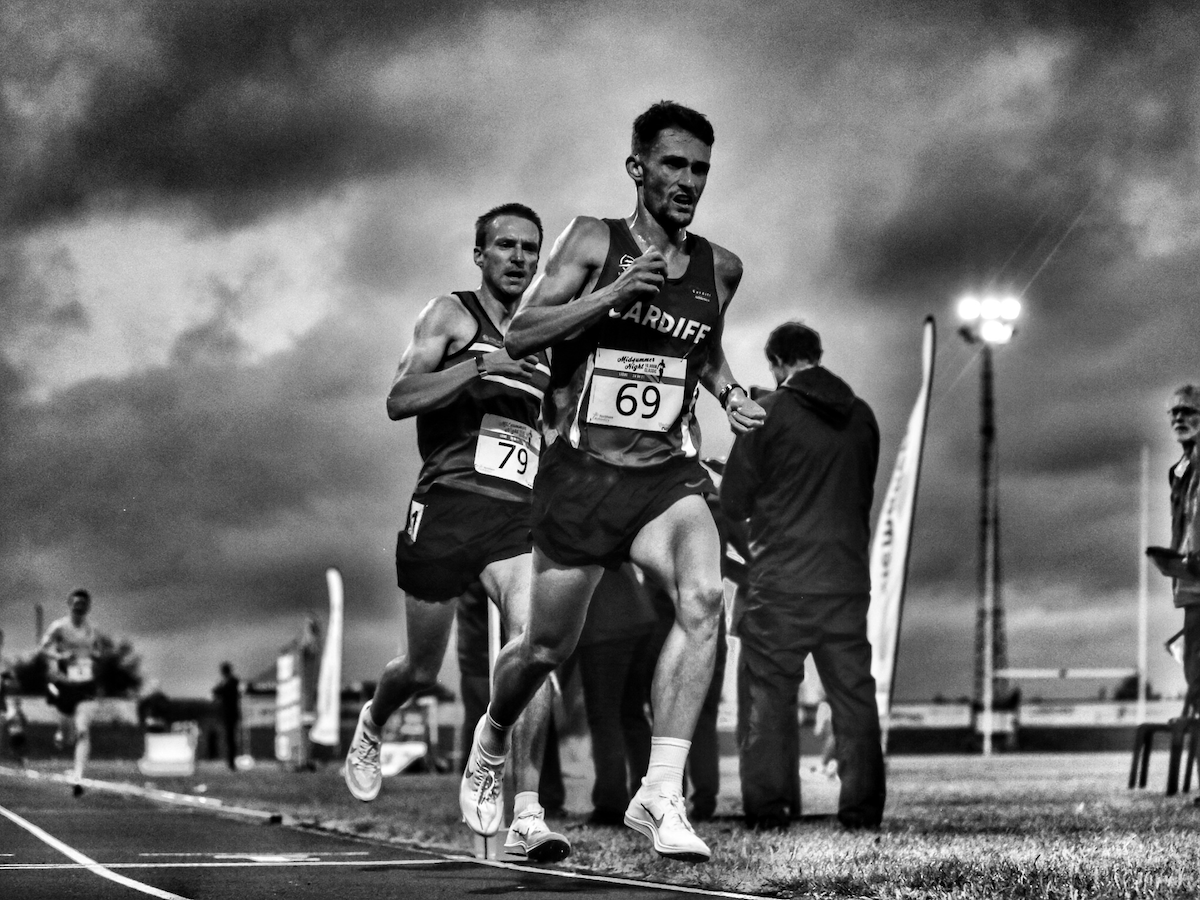 Whilst I definitely feel like it’s important to work out a good race build-up and stick to what works, for me this means varying things a bit. This especially goes for races that are close together.

Physically there won’t be much difference, but mentally it keeps it fresh and you need to be mentally fresh for races. I think as long as you listen to your body and what you feel like doing, you won’t go far wrong.

The day before the race was the same, but there were other small differences such as a slightly different final session a few days before, one on the track, another on grass, another doing some hills.

The week before that race I boosted my confidence by picturing a sub-14, the splits and just believing in myself. I’m a big believer in hoping for the best, expecting the worst, so I think it’s important to not create some unrealistic fantasy that it’s going to be easy and you’ll feel amazing the whole way, but equally the key is to believe in the goal you’re setting.

A week before Leeds, I knew I was in very good shape, but I wasn’t confident in a sub-29, 29:10 seemed much more achievable. So, over the course of the week I imagined running sub-29 until I actually believed I would. By race day I was as confident as I could be.

The first 4k of the race was really easy. We were going at about 29:10 pace and I was tucked in 2nd place, but then the grind of the 10k started and I had to make an effort to concentrate. I hit 5k in 14:34 and honestly, I wasn’t thinking sub 29 at this point, I just wanted to get as much out of myself as I could and try and win it.

After 5k, the second pacer Omar increased the pace, knocking out metronomic 69s laps and we clawed our way back to sub-29min pace. Omar was incredible in taking us all the way to 8k in 23:13 and then it was just down to Nathan Jones who was leading, and me.

I had definitely felt the last k, which was a 2:51, but I found myself still able to keep running fast.

It was weird, my body was doing the job, but mentally I felt weak, like I just wanted it to be over. Thankfully my focus was really good and I was well and truly committed.

The only thing I knew was that dropping off was not an option and all my focus was on sticking to Nathan like glue! Nathan kept a very strong pace going and even threw some surges in. I covered everything, though almost lost contact with 700 to go. Once we hit one lap to go (27:51) I had basically achieved the dream of what I had imagined in the week prior – getting to 1 lap to go with a sub-29 guaranteed. Unfortunately, I hadn’t imagined being in 2nd place at this point! I was really feeling the legs and whilst I managed a strong 67s last lap, I had no real kick.

That had been hammered out of me over the last 24 laps and in particular the 2nd half – this time I ran a strong negative split -14:34/14:24 for 28:58. Sadly, this time I had no position improvement! However, I was more than happy to pick up the Northern title and finally nail the 10,000m.